On Wednesday, Sept 16th, 2009, the week of the Atlanta flooding, I added a new little friend to my life. I need to back up several days to tell the whole story, though.

The week before the flooding, I walked out of my apartment on a bright, sunny morning, on my way to work, and small, sudden motion in my peripheral vision caught my attention. There were two little kittens, one gray and white, the other black and white, with almost identical markings. One was sitting in a shrub, the other had just leapt from it to safety under my house.

Where the front wall of my house meets the ground, there is one layer of exposed cinder blocks. One of these blocks is turned on its side to provide ventilation under the house. Once upon a time, someone built a small concrete wall just in front the ventilation brick to box it in and keep rainwater out. This is where the little kitten jumped to for safety, and his little sibling soon followed. They scrambled under the house, and then poked their heads back out to look up at me. As soon as I approached them, they withdrew through the cinder block, under the house. They were cute, but I figured I wouldn’t interfere with nature, and proceeded on to work. 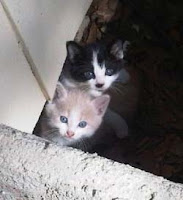 I got a picture message on my cell phone from my neighbor with a note that said something like, “You have some kittens outside your house.” The picture had the black and white kitten, with a crème colored kitten I hadn’t seen before, so we were looking at a total of three.

Over the next several days, my neighbor and I kept tabs on them, and saw the mother (who must have been wild) nursing them a few times. Anytime we approached she quickly scurried out of sight. My neighbor even set some cat food out for them.

Then the rains came.

And they came even more.

Noah himself showed up and asked if there were any cats around, as he’d need them for the ark. (Just kidding.)

One night, I was sitting in my recliner, talking on the phone and I heard these tiny, itty-bitty mews coming from outside. I set down my phone, and opened my front door to torrential rain. At this point my front yard had begun to pool up, so what should have been the “blat, blat, blat” of rain hitting solid ground was a loud trickling sound as if 30 streams were running through my front yard. I stuck my head out the door and looked to the left, down at the concrete wall surrounding the ventilation brick (henceforth known as “the box”), and didn’t see anything. I absentmindedly stepped out onto the small, square, concrete pad that is my front porch and looked at the deluge. I stood there a few seconds before I heard another mew, and when I looked back at the box I noticed a little crème kitten, almost the same color as my house (which was why I hadn’t see him to begin with) clinging to the inside of the box. He was facing away from me, and because of the rain, he hadn’t heard me. I thought to myself, “Aw. He’s never seen rain, and he’s amazed at the water pooling up around the box.” It was a good five inches deep. I don’t know why, but I still decided to let mother nature take its course, went back inside and returned to my phone call.

About fifteen minutes passed before I heard the mewing again. I went back outside to check on the little fellow again. This time I leaned a little closer and saw the inside of the box had begun to flood. There was already an inch and a half of water pooling up. That’s when I realized the kitten was stranded on that little wall with water both outside and inside the box. He wasn’t amazed by the rain, he was terrified.

Some sort of instinct kicked in. One that said “save him.” However, I knew I needed to lay a little groundwork first. I went back inside and found a cardboard moving box and put a towel in it. I grabbed another towel and threw it around my shoulders. I put some flip-flops on (because who knew what was lurking in the water I’d have to step in to get to him).

Now, at this point I have to tell you that I already wanted a cat, but had put it off for a long time because of the expense, and did I really want to commit to a little life and be responsible for it for years, and years.

So, if you will, imagine me standing there on my concrete-pad-front-porch, rain coming down all around me, with my blue jeans rolled up to my calves, flip-flops on my feet, and a towel around my neck, staring at this little kitten when the thought pops into my head: “I may be about to meet my cat. This may be the first time I touch him.” All of a sudden this seemed like the making of a momentous occasion and I’d put a lot of pressure on my own shoulders.

Time seemed to expand. Every move I made seemed to take forever. I remember stepping to the frigid water, which went up and over my ankle, and wading over to him. He still hadn’t heard me because the rain was so loud. I noticed that, even though he was under the overhang, he was covered in tiny droplets of water as if the morning dew had settled on him.

I reached out that long, endless reach with my left arm and my hand grasped his midsection.

Time jerked into fast-forward. So did the little kitten. He thrashed, and spat and hissed all at the same time. He flailed his little legs (with some mighty sharp claws at the ends of them, I might add) as he tried to wheel around on his “attacker”. A moment later, I had lifted him to the towel around my shoulder and draped it around him. He instantly went silent and I waded back to my front porch, went inside my house, and straight to the moving box. I lowered him onto the towel and then put the lid on the box, thinking that this would make him feel safe.

I went about my business for a while, hoping that the little guy would calm down. I eventually went back to the box and lifted the lid only to hear more hissing and spitting. The box was even lurching around as he thrashed. He had a lot of strength for such a small little fur ball. He eventually calmed down and then burrowed under the towel. In hindsight, I think he was scared because he couldn’t see anything and didn’t know what was going on. Once he could see, he was fine.

I let him set there for an hour or so, before picking him up and holding him in the crook of my arm. He snuggled right up, apparently relieved to have some warmth.

Zaphod, as I’ve named him, has grown into quite a playful cat and I’ve taught him some tricks I thought only dogs could learn. He sits, stays, stands, jumps up on his kitty condo, and crawls inside all on command (with the promise of a treat, of course). I’m teaching him to walk in a circle right now, and he seems to be picking that up pretty easily.
Posted by Jason at 5:23 PM

Jason
Hmmm. About me. I need to come up with something new. The last time I filled this out was in 2010, so it's coming soon, I promise.